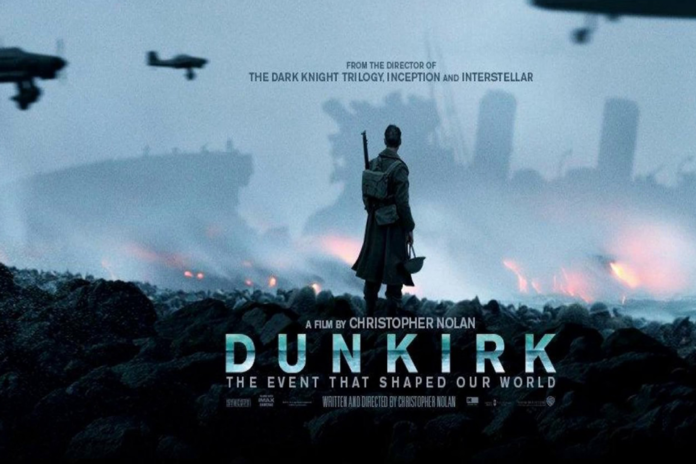 Dunkirk is Christopher Nolan’s latest movie. This won 3 academy awards and got nominated for 4 more. Dunkirk has iconic Christopher Nolan movie traits all over it such as nonlinear story line, different screen aspect ratios and insidious music. This is a war movie and the story sets in 1940 during World War 2. Dunkirk simply managed to get to the top of my all-time favorite war movies because of the story line and the marvelous directing of the movie.

In the beginning we see a young British soldier name Tommy comes to a beach in Dunkirk in northern France. He was the sole survivor of his team after the German army ambushed them. When he arrives to Dunkirk, it was full of soldiers that are waiting to be evacuated. Then he finds a soldier names Gibson who was burying a body so he helps him.

After a couple of minutes, enemy planes attacks the beach and after that  Tommy and Gibson finds a wounded soldier and carries him to a British ship that is going to sail but they gets ordered to go back. Then that ship gets destroyed by another plane attack but later that night, they manage to leave in an army ship but it also gets destroyed by torpedoes but they manage to get back to the beach. At that time Tommy saves a life of another soldier named Alex.

At this time Royal Navy of Britain has requested all civilian vessels to go on rescue missions. So a civilian sailor named Dawson goes to Dunkirk with his son Peter and another teenager named George. Then in the middle of the sea, they rescue a soldier from a sinking ship. Later that soldier finds out that they are going to Dunkirk and refuses to go back there saying that it’s a lost hope. Then he tries to turn the boat around and in that process he accidently pushes George and damage head.

Meanwhile there are 3 friendly planes lurking around the sea and their goal was to defend the evacuation in Dunkirk. But two of those planes get destroyed by enemy planes and leaves Farrier as the last pilot. Later, a pilot from Farrier’s team name Collins gets rescued by Dawson and his son. Meantime after Tommy returns to the beach, he and Alex joins another regiment with Gibson and hides in a beached trawler. Then later Alex accuses Gibson of being a German spy since he was always silent.

Then Gibson says that he was French and he stole the identity of the soldier he was burying. He was simply planning to evacuate with the British army at that moment. Then the group leaves the boat when it starts to go down but Gibson couldn’t get out since his leg gets caught by a chain so he drowns with that boat. Then Dawson and his team comes to rescue soldiers in that area of the sea including Tommy and Alex. Later, Peter realizes that George is already dead after that accident but he tells the other soldiers that they rescue that he is fine.

At this time Farrier manage to reach Dunkirk by himself and shoots down a dive bomber and manage to save people who were being evacuated at that time. Then he manages to land his plane beyond that area and sets his plane on fire before getting caught by the Germans. Totally around 300,000 people were evacuated from Dunkirk at that time. When Dawson returns home with the soldiers he rescued, he gets praised for saving lots of lives. Then Peter goes to a local newspaper to tell their story and that newspaper names George as a hero in their front page article. Then Tommy and Alex boards a train and goes to Woking and gets a hero welcome.

Throughout this movie, the audience will understand that the story has a nonlinear storyline and with that method, Christopher Nolan successfully managed to tell the story in a phenomenal way. The audience would not be able to take their eyes off of the movie until it reaches the end. Since the story has lots of twists and full of unexpected scenarios, the audience would hold their breath while watching it. For me, that was a very common thing with almost all of Christopher Nolan’s movies.

Some say that Christopher Nolan is the best film maker of all time since he writes and directs most of his movies and all of them are always masterpieces. So if you have any doubts about that saying, I strongly recommend you to watch this movie and you would realize that there is a truth to that saying.